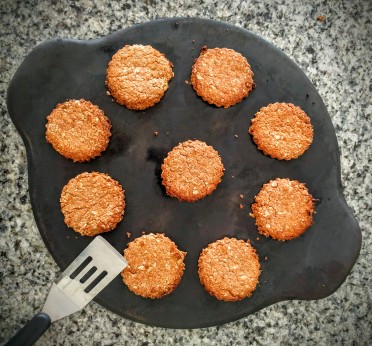 The biscuit just out of the oven.

As a child I never remember having chocolate spread and as an adult I didn’t really ever think about eating it. I have now discovered a whole new liking for my homemade Nutella. It is full of nutrients that help to fuel the body and this spread works really well with the cinnamon in this biscuit.

One of the main ingredients I like to use in my biscuits is oats. They make a fantastic base for the biscuit. Although, I have to use gluten free oats now as I have a sensitivity to normal oats. These oats have to be grown and pass a number of tests before they can be sold to the consumer. They are slightly more expensive than the normal oats but, I believe, they are much better for your body.

Oats are good for boosting the immune system and can help your immune cells find and get to infections quicker. They are great for maintaining blood sugar levels which means they keep you fuller for longer. Oats are simply heart smart as they can also help to lower cholesterol and keep your heart healthy.

Another fantastic ingredient in this recipe is cinnamon which I have to admit I think I’m in love with. It’s a fantastic spice to start adding to your diet on a daily basis. Cinnamon holds a compound called cinnemaldehydewhich is naturally present in the spice. According to science cinnamaldehyde is the source of many of the antifungul and antibacterial properties that make it brilliant for your diet.

Cinnamon can reduce blood pressure and it can have a positive effect on blood markers for those with type 2 diabetes. It can also help to manage Polycystic ovaries syndrome. (PCOS). A recent study found that cinnamon can reduce insulin resistance in women with PCOS. Cinnamon can help mitigate menstrual bleeding associated with common conditions of female health such as endometiosis, menorrhagic and uterine fibroids.

As I have PCOS I try to include cinnamon in my diet daily. I love to put ground cinnamon on my porridge or in smoothies. I also drink a three cinnamon tea which my husband tells me smells like aniseed balls?!?! As well as breakfast I always try to include it in savoury dishes too. I have been experimenting with this spice in curry and with fish. However, I really love it in this biscuit as the cinnamon adds a beautiful flavour for me. 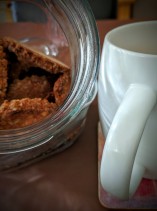 These biscuits make a great snack and are very easy to transport in a small tupperware box. They also make a great gift for friends or just if you want one with your cup of tea in the afternoon. I love these as they are quick, easy and simple to make and prepare. They take no time at all and are delicious. We hope you enjoy making, preparing and eating them as much as we do. Enjoy!